I asked about the best and worst gifts on @psychomama_julia profile on Instagram. I received over 800 responses. Quite a lot. The responses were amazing! I laughed so much I thought I was going to die laughing. I thought that only Fergusek can make me laugh. But “an engraved broom, fortunately from already ex-husband” – smashed me completely

However, I wouldn’t be myself if I hadn’t checked for research on this subject. It turns out that there is not only, the art of gift giving, but also, the science of gift giving. Why have psychologists studied this topic so thoroughly? Because research has shown that gifts can strengthen or weaken a relationship.

And psychology is the science of relationships, so if you want to have good, lasting relationships – it’s better to know how to give gifts that make the relationship flourish.

All that people want and miss are simple, predictable things – although, with a lot of individual variation. Nothing shocking, as research by psychologists has shown.

Giving gifts is not rocket science (even according to psychologist) nevertheless  number of HORRIBLE gifts is frighteningly large!

Gifts are a bit like money – they may not matter, but… we all know it’s not true.

Poor scientists – instead of looking for a cancer or COVID vaccine, they were doing research on how to give the best gifts … Each of the following gift giving rules is an inference from research. So that this effort is not wasted – read, apply and pass to whose … who have a slight problem with it.

Mindfulness is screaming at the top of your voice: “YOU ARE IMPORTANT TO ME!!” It’s thinking: your needs and wants are my bible.

It turns out, many people respect the Bible, but still not enough to read it.

The amount of mindfulness within us is often next to nothing, and the truth is that it is much more precious than money. Because a gift is only as valuable as the mindfulness you put into it: the time you spend thinking about it, the time researching what the person wants, the time spent searching for it, the time spent packing it beautifully and writing a meaningful note.

Mindfulness is MORE important than the money you spend on it. It’s the most expensive thing you can give the other person!

The deadly sin: pulling a random gift out of your ass and expecting that someone will jump for joy and be grateful for it.

Mindfulness rules out randomness: so, no waiting until a gas station is your only option to save the day. Dream gifts can rarely be found in a place where you refuel your car and eat shitty hotdogs.

# 2 The best gift is an EXPERIENCE

Numerous studies show, that experiences, not things (even gold, diamonds or red Ferrari’s) that strengthens the relationship between the giver and receiver.

The greatest sin (typical me) – giving an experience that is good for you and not the person it’s supposed to be for.

Not everyone likes to sleep in a hammock in the Colombian desert, climb glaciers or swim with sharks. I love it –  Fergus a lot less or not at all.

I personally have the biggest problem with this point – it is often difficult for me to understand that something that I love so much – is not another person’s dream.

# 3 Give a gift that shows WHO YOU ARE

It sounds a bit unintuitive, but numerous studies show that gifts when someone gives a piece of themselves and shows who they really are, are much better appreciated than gifts we think the other person would like.

This is partly because, contrary to how we think about ourselves, we have a very, very low ability to predict what the other person wants and what they will like.

Deadly sin: Trying to convince others that what we gave them is exactly what they’ve always dreamed about.

I still get presents just because they are ‘green’. I may love the colour green, but I don’t love “just anything green”. A shit present that’s green, is still a shit present.  Some people get clothes that they wouldn’t wear if they were dead, just because their mother-in-law thinks that, “it would look great on them”. Or some get natural cosmetics and think, “if I really wanted to smell like piss, I would put my face into the toilet”.

# 4 A PRACTICAL GIFT is better than an expensive one.

The key point here is accepting that, “practical” has different definitions for different people.

For some, nothing is more practical than a copy of the Mona Lisa, because orgasm just looking at her, but for others, it’s a gift that offends their aesthetics and is the very definition of a “dust collector.”

So we come back a little bit to point 1 – MINDFULNESS.

Practical is something a PERSON finds useful – either physically or emotionally. We just have to accept that the people next to us aren’t our clones.

Research clearly shows that people are more grateful and have more tenderness towards the person who gave such a practical gift vs a more expensive gift that they would never want.

Deadly sin: Buying practical gifts for yourself. Just because you like drinks – don’t give your non-drinking husband a cocktail kit. Or an original ashtray for someone who doesn’t smoke.

# 5 The best gift is one that gives LONG-TERM SATISFACTION rather than immediate ecstasy.

Maybe you’ve seen a child unwrap a toy, play with it for a few minutes and then abandoned it forever – this is just an illustration of a gift with instant gratification, not long-term satisfaction.

There was a series of fun experiments which showed, that girls who were given a rose bush to watch it bloom were much more grateful and touched than those who received a large bouquet of cut roses (there was no continuation of the experiment, so we don’t know if it ended up in marriage).

Sure, a house covered in rose petals is worth a thousand likes and 2 tons of envy from 100,000 followers, but focus less on Instagram and more on something that lasts.

# 6 Give someone something that they really ask for.

Some of you may find that this text insults your intelligence, and that psychologists are crazy to do research on something as trivial as presents. But you’d be surprised how many people are resentful because they still get not what they want – just read some of the comments on @psychomama_julia‘s profile on Instagram.

Even though someone clearly asks for something specific, leaving notes, making dream boards and leaving tabs open on their computer, the other person often ignores it. The husband thinks that a Pandora charm bracelet is much prettier than the one his partner wants from the niche designer. The mother-in-law finds a cotton nightgown much more practical than the one from Agent Provocateur. And the wife thinks that warm socks, a tie and cologne are incomparably better than the PlayStation.

There is  no point of making people happy the way YOU want them to be happy. Give someone a present they ask for and don’t try to be original for the sake of it.

A series of psychological experiments which showed that giving a small gift that a person wants contributes much more to their happiness and a better relationship than giving an expensive gift that is irrelevant.

Deadly sin is the attitude: “I know what is good for you” and applying your standards to everyone.

You’re not giving yourself a gift – you’re not important here.  Another interesting thing is – There is nothing that is considered a great gift by everyone.

For example, I cannot think of anything more lazy than giving a voucher or money (maybe more lazy is not giving anything at all). At the same time, 121 people wrote to me that this is their favourite gift not my gift tribe

I love travel gifts – Fergus not so much ( we both hate vouchers). So, our gifts should not be reflection of what we would love but what other person would love

# 7 Give gifts to those who want gifts.

It is not so obvious that everyone wants a gift. People are programmed to be reciprocal. But some people make you doubt it – we all know a few of them.

My beloved Paweł Tkaczyk, to my surprise, doesn’t like birthday gifts.

Research has shown that openness to accept a gift contributed more to the happiness of the person than the sheer value of the gift.

I wanted to add my criteria for the best gift (unconfirmed by any research, at least none I know).

My Buddhist teacher always said that a good gift is one that is hard to part with – you love it so much, you would like to keep it for yourself.

This gift is the best proof of love for whoever you are giving it to.

There is also an alternative criterion:

The gift must be one that the person would love to have, but finds it hard to justify buying it for themselves.

Do you know what Fergus thinks is the best gift I gave him?

Even though I have taken him to Italy, the Greek Islands, bought him a computer, designed jewellery and a silk suit, he still thinks the best gift I gave him… was a  money plant. Because it is a 1.8 M money plant (the largest one that I could find in Poland after calling 40 florists), for which I paid … I will not tell you, because I would never have paid this money it were for me (but still much less than this the trips or a computer.

Fergus, for some reason I don’t understand, is obsessed with money plans. He believes they bring good luck. Such a large plant is a lot of luck. But for him, it was always a waste of time (you won’t believe how difficult it is to find such a big money plant) and money (I still think it’s cockamamy to you pay so much for flowers).

And this flower is the quintessence of mindfulness.

If you find this helpful, please share. Someone may find it useful too. #onetribe 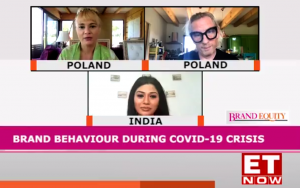 What should brands do during Covid-19 crisis?

SING UP FOR NEWSLETTER