The cheapest way to help your baby grow up healthy

Babies can survive without fancy new bottles, expensive muslin blankets, toys “invented” by psychologists and neurologists, even without organic nappies and creams, but there is one thing that that every baby needs (and it's free!)
Reading Time: 3 minutes

When I was pregnant my doctor said: “No more blogs or Internet! Nothing about the baby. This is your prescription.”

I was panicking. I was obsessed with things I thought I should buy for my baby.

One day, however, I met Olga Kozierowska who is my dearest friend, a mother of 3 and my big hero. She said: “You will see that materialistic things are not what will make your baby healthy and happy long term. It’s all about something completely different.”

One of the key things is touch.

Touch is proven to have both short and long-term development benefits, which is why positive and gentle touch is important from birth.

Scientists discovered that skin-to-skin contact between a baby and its parents (parents – not only a mother!) can speed up its emotional and motor development. Touch reduces anxiety and provides pain relief.

The latest research shows that touch in infancy aids brain development. Touching newborns calms them down: they are reported to cry less and sleep better, which influences better brain development. It is especially important with premature babies. Massaging premature babies for 20 minutes a day helps them put on weight, which is crucial in the first couple of months of their lives. The more they experience a nurturing touch (breastfeeding, skin-to-skin contact and kisses), the greater the brain’s response to touch.

Too much is never enough – kiss, hug, cuddle, massage your little one as much as you can.

Children, who experienced early deprivation, have higher levels of the stress hormone, cortisol, and lower levels of oxytocin and vasopressin (emotion and social bonding hormone) even in their adult life. That is why in some countries there are volunteers who come to hospitals and orphanages to hug and hold newborns.

The importance of touch was not always obvious. For a long time people thought that all babies needed was only food and a safe environment. In the 1950s behaviourists and psychoanalysts believed that babies became attached to their mothers because they provided breast milk. One psychologist said: bollocks! they were preaching about the importance of comfort, companionship, and love, in order for a baby to grow healthy and happy. 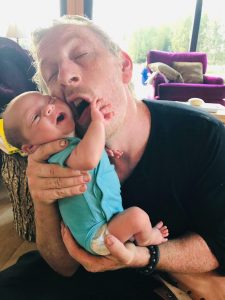 To prove that in one of the experiments, the psychologist took infant monkeys from their biological mothers and gave them to surrogate mothers:

Even when the mother made of wire had an advantage (a bottle of milk to feed them) the infant monkeys spent more time with the mother made from soft cloth. They ate from the wire mother, but after that, they immediately ran back to the cloth surrogate for hugs.

The other shocking thing was, that a wire mother was better than no mother. Without a surrogate mother, the baby monkeys were “paralysed with fear, huddled in a ball sucking their thumbs”, throwing themselves on the floor, rocking back and forth. Even with the cold and not comforting wired mother, when a noisy toy was placed in the cage, a baby was attacking the toy.

Small monkeys who never had a cloth mother that they could cuddle with – grew slower, and many even died.

This method proved how important in infant development a maternal touch really is. This experiment showed, that the establishment of a bond between a baby and its mother, is not purely dependent on physiological needs such as warmth, safey and food, but also on but also on emotional ones like acceptance, love and affection.

Unfortunately, many baby monkeys paid the highest price in order to convince humans that a mother is not just a milk factory.

If you find this helpful, please share. Someone may find it useful too. #onetribe

SING UP FOR NEWSLETTER